There is a Chinese saying, “One rarely regrets time spent reading books,” and though he has enjoyed various adventures in his life, books have given Scott Forbes Crawford many of his greatest joys. Born in Washington, DC, when he at age eight moved with his family to Tokyo, a new world of discovery and challenge opened to him. Enchanted by Japanese culture as a boy, the spell of Asia only deepened when as an adult Scott settled in Beijing, where he became an author (and a father).

Scott’s forthcoming novel Silk Road Centurion recasts (with much license) his experience living as a foreigner in Beijing, following a Roman soldier’s adventures in ancient China. His short fiction has appeared in fantasy, mystery, and horror magazines and anthologies. His articles, ranging from medieval piracy to marriage in ancient Rome to Aztec battles, have appeared in various publications, and a history book on the Han-Xiongnu War is in the works.

He lives with his wife and daughter in  Taipei. 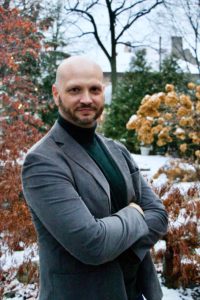